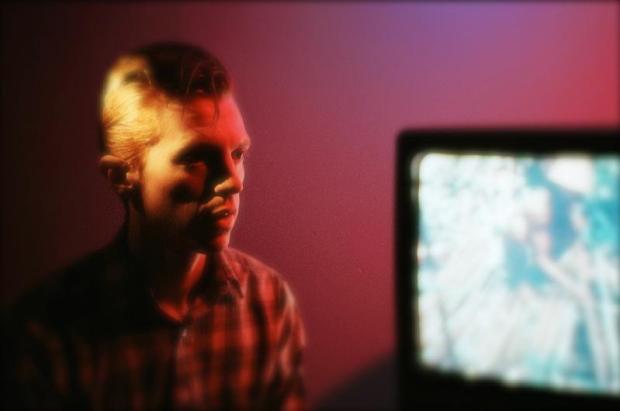 Many a freelance music journalist takes on copywriting for artists, labels and PR firms to round out what’s typically a rather spare and piecemeal income. I’m no exception. We don’t talk about it much because it seems like, and can be, a compromise of integrity. We make rules for ourselves to keep our motives pure or, at least, bifurcated, but we typically don’t give away our employers. I’m making an exception for Baltimore’s Co La, recently featured on Pitchfork behind his just released Daydream Repeater LP (NNA Tapes), because our fact-finding interview was so fascinating that I’d be remiss as a journalist (so much for bifurcation) not to share it. It’s been itching at me for three months.

Co La, a.k.a. Matthew Papich, is a collage artist at the surface. He samples, he interpolates, he rips off, he recreates. He borrows from sun-dappled reggae and dust-caked soul. He takes bricks from Spector’s Wall of Sound and builds strange huts from them. What traditional beat-makers call loops, he calls “loopholes,” not because they represent his circumnavigation of copyright law, but because they act, for him, as portals into “magic grooves that can just roll forever.” The best part of a song for Co La is like that bizarre kismet tube that leads Donnie Darko from one surreal scene to the next on the way to the end of the world. I’m for music that compels without added exposition, but reading Co La’s thoughts on process provides the listener a loophole into his strange songs.

So hit the jump below to check out a tune, then to dig into the conversation. The questions are incredibly banal since my job was simply to gagther cold fact for a press release (which I’ll include at the end), and the exchange was by email, but, the answers more than make up for it. Let’s start at the beginning…

END_OF_DOCUMENT_TOKEN_TO_BE_REPLACED

My favorite record label, Anticon, and L.A.’s greatest event-promoting radio collective, Dublab, have teamed up to co-author a series of 12-inch vinyl releases called In The Loop. Dublab curates, while Anticon (taking over from Plug Research) handles the physical release. Read about the two entities’ upcoming collaborative debut, and download an MP3 off of it, here.

This edition features five releases by L.A.-area artists on L.A.-area labels — Mika Miko (PPM), Xasthur (Hydra Head), RxBandits (Sargent House), Castledoor (Seven Inch Project), and Shafiq (Poo-Bah) — that either are not available on CD, or sport a drool-worthy design. A free MP3 accompanies each writeup, along with a photo of the package shot, for better or for worse, by yours truly.

Mika Miko's We Be Xuxa (PPM)

Future installments will include up-to-date reviews of wax by L.A. artists and/or L.A. imprints, profiles on local vinyl shops and labels, cratedigger-curated selections, swap meet outings, and whatever else seems like a good idea at the time. If you haven’t clicked over there already, please do so here.

Andrew Broder, best known for his work with the criminally slept-on Minneapolis outfit Fog, has churned out no fewer than ten the new albums this year. But they’re not what you’d expect. These digital, label-less releases are improvised and edited instrumentals for guitar, turntables and various noisemakers. Moreover,  they’re inspired by drone music and doom metal. Click over to Decider Twin Cities to read my interview with Broder, and check out the other half of the piece here, with streaming audio and reviews of each record.

The other night, a firefight / Bursts of sewing machine gun fire
From your position / Barricaded behind the piano.
I return with small arms / Stuttered shots from typewriter keys.

However faintly / As we each seek to claim / Disputed territory
The us beneath the other / Which is rich / In natural resources.